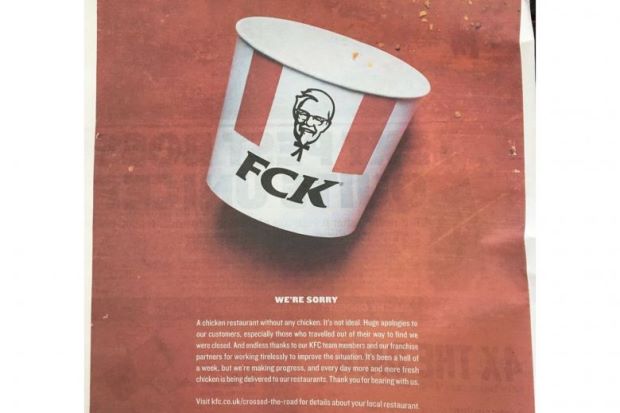 Quote:Fast food chain KFC responded cheekily to a chicken shortage in hundreds of stores in Britain by putting out a full-page newspaper advertisement that rearranged the letters of its name to "FCK", much to the mirth of its customers who may have forgiven the ubiquitous fried chicken brand for its lack of fowl.

KFC had closed half of its 900 stores in Britain earlier this week after operational issues with its new delivery firm DHL, the BBC reported on Wednesday (Feb 21).

DHL said it regretted the interruption of supply and was working to rectify the situation as soon as possible.

You would think it's the only place in the UK to get chicken. While I'm not crazy about it, it's got a lot of MSG in it, I know a lot of people that go for it like it was crack or something.

I don't like it either. There are a lot better places to eat chicken.
Reply Quote
Octo Show this Post

Funny stuff.
They could never run an ad like that in the states for fear of a boycott from religious leaders.