Posts:41,550 Threads:1,589 Joined:Feb 2011
No none of this was chosen by the people for the people. Democracy is an illusion created by the same people who provide us with very limited options that are equally crappy.
Reply Quote
JayRodney Show this Post

There probs they create are our probs. I think they have bigger probs they want to inflict on humanity. Gov is just a gathered representation from the people for the people. The prob is them and they are growing out of control and not in touch with real life and balance.

They are all legitimate mafia. Every last one of them. In truth, we form government to ensure and protect the freedom that is already inherently ours.
When governments overstep that boundary they become legal mafia, and are useless crosses we carry around.

Posts:925 Threads:101 Joined:Jun 2014
We they us have and will face the hardship of a conformed program. Time to break this vicouse cycle. Time will alter soon one way or the other its enebeddable that We the people will see the truth and make a stand against the deception. I have failed in the past to help evolution but that is just a leaning prosses to test the boundary's of this matrix. The life stream of truth will eventually save us threw understanding & respecting all faiths. After all they are all building blocks and someone soon will put the pieces together.
Reply Quote
UniqueStranger Show this Post

(12-06-2015, 05:08 AM)JayRodney Wrote:  It would ƒükk up the US prison industrial complex. While Obama attempts to stay "cool" and "relevant", it's obvious as hell he's fucking pwned by the banks, big pharma and insurance lobbyists.
Must suck to be their bitch.

Can't go setting the cash cow free.
What politics from both sides wants to teach us is that things are never complex. If you have your little package and something doesn't fit into that package, You don't know what to make of it so you want to dismiss it or then you will have to do the work of reconsidering your assumptions. - Michael Malice
Reply Quote
JayRodney Show this Post

Posts:30,289 Threads:1,495 Joined:Feb 2011
Look at the money Colorado is raking in from legalization. The current system of keeping it wrongly classified and illegal makes a few people enormous amounts of cash.
They only care about preservation of the status quo. 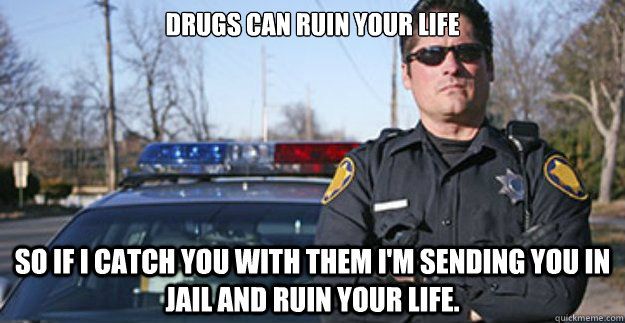 You know, any time the US declares war on this or that... it's a given it will fail miserably.
But as common sense would dictate, rather than end the war on everything, they just keep ramping it up.
The corruption is overwhelming.

That was always one of the most

memes ever. It's just wrong on every level.

You are going to next year.
What politics from both sides wants to teach us is that things are never complex. If you have your little package and something doesn't fit into that package, You don't know what to make of it so you want to dismiss it or then you will have to do the work of reconsidering your assumptions. - Michael Malice
Reply Quote
Coolchick Show this Post

You are going to next year.

Posts:15,718 Threads:473 Joined:Jun 2012
I need more information on this, because on one hand Trudeau states weed will be legalized, then on the other hand he is stating regulation and restricted access.

Posts:30,289 Threads:1,495 Joined:Feb 2011
Seems like you have what on the surface seems a cool guy, and underneath is a corporate puppet.
The US has another year of that bullshit to somehow endure.
Amazing how the left and their cheerleaders the MSM seem all progressive and shit on the surface, but just right underneath the fluffy PC/SJW rhetoric are establishment right wing corporate fascists.
10 years ago, I was accused of working for the DNC at GLP, I was a really strong supporter. The current US regime left me so disenfranchised I had to run away screaming.
I don't do the cognitive dissonance corporate hippie thing very well.

Posts:15,718 Threads:473 Joined:Jun 2012
He is using the excuse that our Canadian youth need to be saved from themselves and that (THC) which makes them unproductive citizens to accept low paying, go nowhere jobs. I want to see evidence-based studies (plural) for any restricted access, but those in power always seem to be able to have studies veer to their particular views. So, we need an independent research body paid for by the people.

Okay so I had some time to collect my thoughts on this and Trudeau specifically mentions restricted access on one hand and Canadian youth on the other, so it may be that the restrictions would pertain to youth under a certain age. Because some studies do show using THC regularly damages a growing brain function. If this is his aim, then I would agree with this course of action, that is, if he can fund more studies on this because the existing studies leave more questions unanswered.
--------------------------

"But there's an important caveat here: Those who used the most marijuana in the Meier study had lower IQs to begin with. Dr. Gregory Tau, a psychiatrist and drug abuse researcher at Columbia University, says there's a chicken-and-egg dilemma with many marijuana studies, including this one.

"It's very possible that there's something very different to begin with among teenagers who tend to get into trouble with marijuana or who become heavy users," Tau says. "They could have subtle emotional differences, perhaps some cognitive functioning differences."

Maybe everyone needs cognitive dissonance acceptance and 'how to deal' classes?
Reply Quote