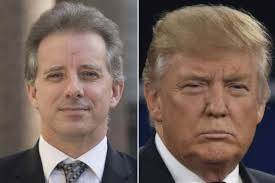 Christopher David Steele (born 24 June 1964) is a British former intelligence officer with the Secret Intelligence Service MI6 from 1987 until his retirement in 2009. He ran the Russia desk at MI6 headquarters in London between 2006 and 2009. In 2009 he co-founded Orbis Business Intelligence, a London-based private intelligence firm.