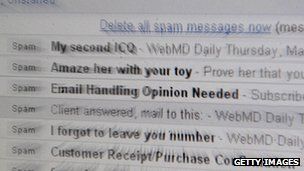 The internet around the world has been slowed down in what security experts are describing as the biggest cyber-attack of its kind in history.

A row between a spam-fighting group and hosting firm has sparked retaliation attacks affecting the wider internet.

It is having an impact on popular services like Netflix - and experts worry it could escalate to affect banking and email systems.

Spamhaus, a group based in both London and Geneva, is a non-profit organisation which aims to help email providers filter out spam and other unwanted content.

To do this, the group maintains a number of blocklists - a database of servers known to be being used for malicious purposes.

Recently, Spamhaus blocked servers maintained by Cyberbunker, a Dutch web host which states it will host anything with the exception of child pornography or terrorism-related material.

Sven Olaf Kamphuis, who claims to be a spokesman for Cyberbunker, said, in a message, that Spamhaus was abusing its position, and should not be allowed to decide "what goes and does not go on the internet".

Spamhaus has alleged that Cyberbunker, in cooperation with "criminal gangs" from Eastern Europe and Russia, is behind the attack.

Cyberbunker has not responded to the BBC's request for comment.

'Immense job'
Steve Linford, chief executive for Spamhaus, told the BBC the scale of the attack was unprecedented.

"We've been under this cyber-attack for well over a week.

Posts:4,526 Threads:1,029 Joined:Jun 2012
So nobody else thinks this explains the recent net clusterfuck besides me ?
Reply Quote
Octo Show this Post