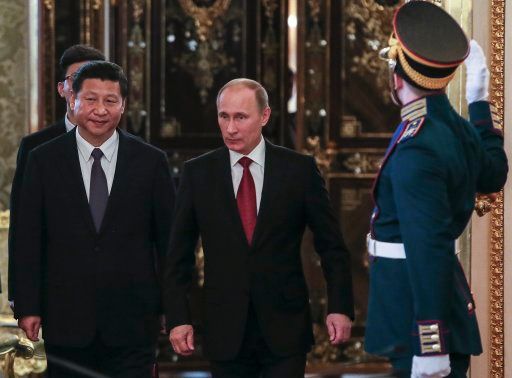 
China’s new leader began his first overseas trip as president with a much anticipated visit to Russia today – a symbolic trip that underlines China’s desire to ensure its energy supply while showing defiance in the face of US influence in Asia.

A grand reception was held to welcome President Xi Jinping upon his arrival in Moscow, with guards riding on horseback brought out to greet a foreign leader for the first time. Kremlin guards snapped to attention as Mr Xi and his long retinue walked into the gilded, chandeliered Grand Kremlin Palace, where they met members of official delegations in the ornate St George Hall before sitting down for talks.

“China and Russia are the main and most important strategic partners,” Mr Xi told Russian media upon his arrival. He said he was eagerly anticipating his meeting with Russian President Vladimir Putin. “In many ways we speak a common language,” he said.

The grand welcome was a clear indication of the importance placed on the visit by Moscow. Russia is one of the world’s biggest energy producers, and China is the top energy consumer. These realities tend to outweigh the traditionally tense relations between the two neighbouring giants, who were bitter rivals during the Soviet era despite their ideological links.

Russia has watched China’s rise with concern, anxious that it might someday threaten its dominance on its eastern borders. But a bigger concern for the Kremlin, one that it shares with China, is blunting US influence in the region. At the start of talks, Mr Putin described the ties between the two countries as an “extremely important factor of global politics.”

Ahead of Mr Xi’s arrival, he said: “We are working together, helping to shape a new, more just world order, ensure peace and security, defend basic principles of international law.”

Mr Xi said that the relations between the two countries are the best ever.

In recent years, the need to counterbalance the growing might of the US has led to the two to set aside some differences. Strong trade links have also smoothed some of the wrinkles in the interim, with bilateral trade soaring to a record £58bn last year.

Beijing and Moscow have taken similar stances on some of the biggest geopolitical issues of recent years, from North Korea to Iran to Syria, often voting in concert to veto punitive sanctions by the UN Security Council.

Many analysts believe their relationship is likely to strengthen, especially as the United States tries to expand its influence in Asia, and both countries are firm in rejecting Western criticism of their human rights records.

The two leaders are expected to discuss Syria and North Korea, but the economy is likely to dominate.

Shortly before Mr Xi arrived in Russia with first lady Peng Liyuan, a £1.3bn deal was announced by Russian and Chinese companies to develop coal resources in eastern Siberia. Russia also sees China as a way to diversify its energy markets away from Europe and it is keen to tie up a potentially enormous gas deal which could eventually see almost 70 billion cubic metres of gas pumped to China annually for the next 30 years.

Mr Xi’s tour continues until March 30 and he will also visit Tanzania, South Africa and the Republic of Congo. In South Africa he will attend the fifth BRICS summit.

Posts:41,552 Threads:1,590 Joined:Feb 2011
Well they depend on each other for trade, just like Finland does.
Reply Quote
KILLUMINATI Show this Post

70% of our exports go to Russia and we rely heavily on Russian tourism. Business is business. I guess when you get up to a certain level it's red carpet worthy.
Reply Quote
KILLUMINATI Show this Post

70% of our exports go to Russia and we rely heavily on Russian tourism. Business is business. I guess when you get up to a certain level it's red carpet worthy.

So what you're telling me is that you are being paid indirectly to say that ?