Not a good day for airplane rage
Octo Show this Post

Posts:41,513 Threads:1,589 Joined:Feb 2011
A DRUNKEN passenger who tried to storm the cockpit in a fit of airplane rage was taken down by a hockey team of 17 off-duty police officers who happened to be on the flight.

Henryk Glowala flew into a rage and tried to storm the cockpit and strangle the flight crew of a LOT Polish Airlines from Warsaw to Toronto earlier this month, the National Post reports.

However, the violent passenger was overpowered by a squad of off-duty Ontario cops who tackled him. The 17 police officers were members of the Justice Hockey Canada team, who were returning from a police championship event in Europe.

Talk about a bad scenario in which to get plastered and show your ass. 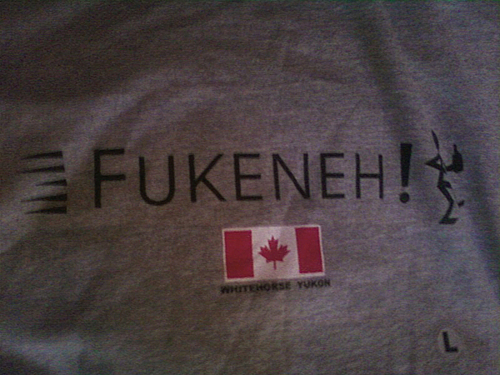 That's a pic of the T-shirt Shadow gave me

That's a pic of the T-shirt Shadow gave me

What the heck is that figure to the right?

What is it holding...doing?
Reply Quote
Octo Show this Post

It looks like a golf club, kinda, but held in an unusal position. I don't think it's a leg...because if you look at the mass involved in the foot area that would suggest two feet...then we have that point on the head...touque with a point? We need Shadow to explain this.
Reply Quote
Octo Show this Post

I see what you're saying. Looks like he's playing schlong golf.

I see what you're saying. Looks like he's playing schlong golf.

Posts:41,513 Threads:1,589 Joined:Feb 2011
Thankfully I found a pic of the golfer on the googles. Hopefully this will settle your dirty mind.