Pot Holes Are A Menace Driving Me Crazy!
Ruby Wolf Show this Post

Posts:10,078 Threads:719 Joined:Oct 2012
All the roads around here where i live are a dilapidated menace literally falling apart and i'll bet anything its costing me around $5.00 in future car repairs every time i drive down the damn street!

Seriously like check out any stretch of any street around here and theres a continuous stream of multiple pot holes and bumps of all sizes all over the place everywhere you drive!

Whats really friggin funny is while your driving down the street and you suddenly see a large pot hole quickly looming towards you and as your driving around or over to avoid it only to drive right into another pot hole as if they're inescapable and out to get ya cuz it sure seems like they are!

Forget trying to avoid pot holes while driving at night because doing that is definitely almost impossible and it aint gonna happen so get ready to shake rattle and roll and break your car or truck and driving around here while its raining and you can actually watch pot holes forming and expanding!

Whats really friggin sad is how i know for an absolute fact that the last time the street where i live on was repaved or resurfaced was way back in the summer of 1977 meaning 37 f#####g years ago!

I have seen several vehicles lately all broken down in the middle of the streets with their rims bent and or their tires flat and or their shocks broken and or their axles warped and this town refuses to reimburse and financially compensate people for vehicle damage caused by this towns withered and worn streets!

Speaking of repairs,guess how many times i've seen town highway department workers outside driving around fixing pot holes around here within the last year? like maybe once!

So now we're starting to get somewhere,like follow the damn money,as usual,because i'll once again bet anything that certain elite town politicians are receiving a percentage of the neverending vehicle repair bill cash thats constantly sucked in by the numerous auto garages around here waiting like sharks in bloody water for broken cars to arrive!

They say and claim while spewing out through their over whitened teeth that millions of dollars from this states lottery mega profits are annually given back to the towns for fixing streets,like ha haa haaa haaaa haaaaa gimme a break and let me tell ya thats friggin hilarious and a damn lie! 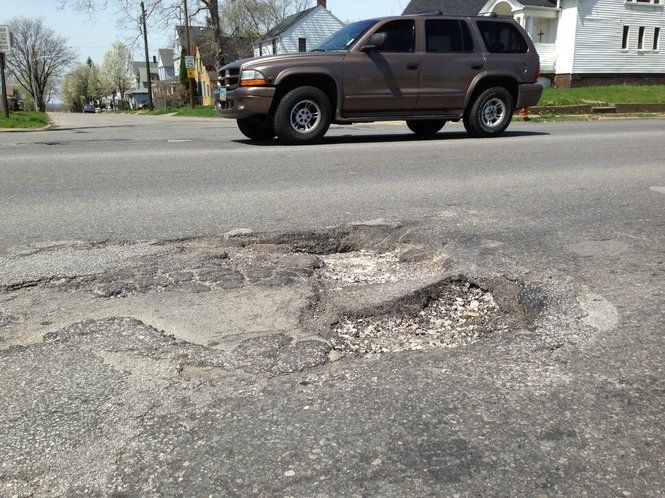 Many if not most of those paying her pension will never have a pension. That's where street repair funds are going.
Reply Quote
UniqueStranger Show this Post

Posts:15,555 Threads:471 Joined:Jun 2012
The pot holes are bad here too after our severe bitter cold Winter (Canada) and I drive slower for the conditions but also for the pot holes. But, when hubby drives my car he just drives at full speed right into the pot holes...all I say it "ouch"! That 'ouch' refers to the car repair bills in the future.