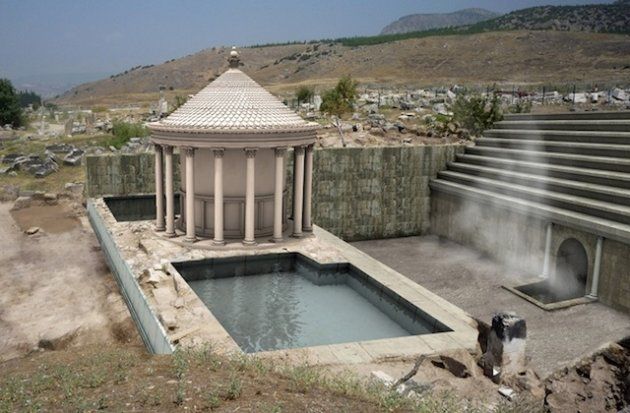 It sounds like something out of a horror movie. But Italian scientists say that the “Gate to Hell” is the real deal—poisonous vapors and all.

The announcement of the finding of the ruins of Pluto’s Gate (Plutonium in Latin) at an archeology conference in Turkey last month, was recently reported by Discovery News. Francesco D'Andria, professor of classic archaeology at the University of Salento in Lecce, Italy, who has been excavating the ancient Greco-Roman World Heritage Site of Hierapolis for years, led the research team.

D’Andria told Discovery News he used ancient mythology as his guide to locate the legendary portal to the underworld. “We found the Plutonium by reconstructing the route of a thermal spring. Indeed, Pamukkale' springs, which produce the famous white travertine terraces originate from this cave.”

Scribes like Cicero and the Greek geographer Strabo mentioned the gate to hell as located at the ancient site in Turkey, noted Discovery, but nobody had been able to find it until now.

“Pluto’s Gate” has been documented in the Princeton Encyclopedia of Classical Sites, which noted in its description of ancient Hierapolis, “Adjoining the temple on the SE is the Plutoneion, which constituted the city's chief claim to fame. It was described by Strabo as an orifice in a ridge of the hillside, in front of which was a fenced enclosure filled with thick mist immediately fatal to any who entered.”

Strabo (64 B.C.- 24 B.C.) wrote, “This space is full of a vapor so misty and dense that one can scarcely see the ground. Any animal that passes inside meets instant death. I threw in sparrows and they immediately breathed their last and fell.”

The portal to the underworld seems just as bad for your health today. The professor said, “We could see the cave's lethal properties during the excavation. Several birds died as they tried to get close to the warm opening, instantly killed by the carbon dioxide fumes.”

According to Discovery News, the fumes emanated from a cave below the site, which includes ionic columns with inscriptions to Pluto and Kore, gods of the underworld. Also discovered: the remains of a temple, and a pool and stairs placed above the cave. D'Andria is now working on a digital rendering of the site.

Amazingly, this isn’t the first entry to the underworld in the world. In the Karakum Desert, reports the Daily Mail, a fiery pit that’s been lit up for over 40 years has inspired visitors to Derweze in Turkmenistan—and on the Web. Geologists drilling in the area came across a natural gas cavern. Hoping to burn off the gas, they set it on fire. The flames continued to burn, leading locals to dub the site the “door to hell.”

What politics from both sides wants to teach us is that things are never complex. If you have your little package and something doesn't fit into that package, You don't know what to make of it so you want to dismiss it or then you will have to do the work of reconsidering your assumptions. - Michael Malice
Reply Quote
The Ghost Of ULP Show this Post

That is what you would call BBQ Wings LOL