One word sums up your last one. Triangulation. Similar to this. The freemasons say they know how to determine distance to the sun and stars by plotting locations over 6 months. Which means they make up numbers for speed and do dead reckoning from a moving target.

The Solar System as we know it

One word sums up your last one. Triangulation. Similar to this.

The freemasons say they know how to determine distance to the sun and stars by plotting locations over 6 months. Which means they make up numbers for speed and do dead reckoning from a moving target.

how can you sum up the video when you didn't watch it?

Tomorrow, I will be able to spell better, in the same time, you will still be stupid !

When the conversation is lost, pick them up on their spelling, Grammar and punctuation ! Socrates . 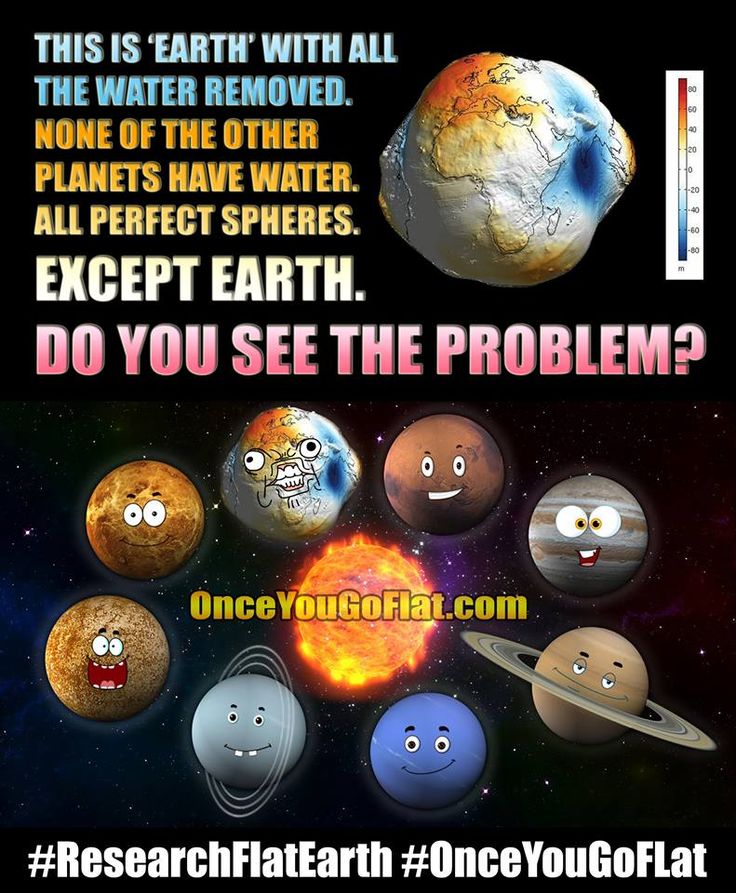 Earth is not a sphere. It's an oblate spheroid. Pear shaped accordimg to the Nasa spokes-shill.
And it spins like a kid's top. 1000 mph at the equator. 500 mph in Canada, 1 mph at the North Pole. And a plane flying north-south has a heck of a time speeding up and slowing down to match the speed of the earth under it.
Reply Quote
Anonymous Kritter Show this Post

She wonders why she isn't taken seriously !

I'm a reader, not a movie fan.

58) The Royal Belgian Geographical Society in their “Expedition Antarctique Belge,” recorded that during the most severe part of the Antarctic winter, from 71 degrees South latitude onwards, the sun sets on May 17th and is not seen above the horizon again until July 21st! This is completely at odds with the ball-Earth theory, but easily explained by the flat-Earth model. The Midnight Sun is seen from high altitudes in extreme Northern latitudes during Arctic summer because the Sun, at its inner-most cycle, is circling tightly enough around the polar center that it remains visible above the horizon for someone at such a vantage point. Likewise, in extreme Southern latitudes during Arctic summer, the Sun completely disappears from view for over 2 months because there at the Northern Tropic, at the inner-most arc of its boomerang journey, the Sun is circling the Northern center too tightly to be seen from the Southern circumference.

59) Quoting Gabrielle Henriet, “The theory of the rotation of the earth may once and for all be definitely disposed of as impracticable by pointing out the following inadvertence. It is said that the rotation takes twenty-four hours and that its speed is uniform, in which case, necessarily, days and nights should have an identical duration of twelve hours each all the year round. The sun should invariably rise in the morning and set in the evening at the same hours, with the result that it would be the equinox every day from the 1st of January to the 31st of December. One should stop and reflect on this before saying that the earth has a movement of rotation. How does the system of gravitation account for the seasonal variations in the lengths of days and nights if the earth rotates at a uniform speed in twenty-four hours!?”
Reply Quote
Anonymous Kritter Show this Post

what makes you think the videos are for you?
you are not that important
Reply Quote