Posts:30,289 Threads:1,495 Joined:Feb 2011
So... the Jewish faith as we know it, did not exist until the timeline was corrupted by the Nazi's, yet they killed not only Jews, but those who remotely resembled them based on facial features?
Why empower a people only to lead them to death?
What about Abraham? The Bible explicitly said he had dinner with god and everyone wanted to hump his companions.
I mean... Abe saw him in the flesh... then the Bible says a million times no one has seen the face of god.
Some cognitive dissonance in that book. 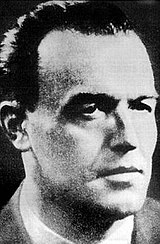 This is a pic of Ari Heim. He was an Austrian SS doctor, also known as Dr. Death. During World War II.
I can find nothing on an Dr. Albert O. Heim.
So this trip back in time... courtesy Die Glocke (the bell) project?
Everything I ever hear leaves me with more questions than answers.

and so it came to pass , that Dr. Albert O. Heim , the Most Evil Man on Earth
and the man who would split the Atom for Nazi Germany ,,,,

was relocated to a Desert in the Middle East ,,, 4000 years into the past


I'm not buying that. I understand it would make sense in the American language that doesn't make a difference between ei and ie in German. Heim (which is still used verbatim in my language and means home), is pronounced as Hime while Hiem would be pronounced as Heem and closer to the Elohim word.
Reply Quote
Cynicalabsurdance Show this Post

I kinda' thought you were revealing a mind blower here.

but I chickened out
tee hee

Helps to be mindful ,,,, I was Born a Hippie
heh heh
Reply Quote
Cynicalabsurdance Show this Post

I'll finish the Story over the next few days or so .

The holocaust narrative just does not stand up to scrutiny.
More like it insults my intelligence.

What does show historical consistency is the West's demonization
of anyone who does not bend and adhere to the Great Agenda.
Feel free to compare with Mossadeq, Allende, Ghaddafi, Assad etc etc etc.

No, I am not a nazi nor a supremacist nor a racist, and I feel sorry
for all unnecessary human suffering.

I strongly suspect that the NSDAP program article #11 is
the pivotal point of it all. Still today, no other European
political party has addressed the issue it pertains to.

Besides, even so and in the particular case of Herr Heim -
The British, the Americans, the French, even the Swedes (!)
performed hideous experiments on innocent victims.

Believing that any of the empires involved in WWII
represented anything less evil than any of the others seems
more and more naïve to me, the more I read and learn.

Guess we'll have to agree to disagree.
Personally, I'm an ever sterner anti-ism-ist, and will most probably
remain so 'til the bitter end...
Reply Quote
Cynicalabsurdance Show this Post

Posts:10,569 Threads:240 Joined:Feb 2011
MK Ultra
came straight out of The Nazi Doctors experiments and it is still in
practice today .

Zyklon B , a pesticide , was used to Gas People to Death ?

U.S. Prison Gas Chambers use a pot of Sulfuric Acid , and drop
a Cyanide Tablet in it .

it was more expensive then Zyklon B Pesticide ?
Bullshit .

yeah , a shitload doesn't add up on that Gas Chamber and crematorium shit .

However , this is the Story of Elohim , The Ancient God of Moses .
and Talk about Genocide committed ,,, Jebus ,,, poor Jericho and the Philistines ,
wiped out by a Marauding Hoard of Goat Skinner's !!!!!!!!!!!
Reply Quote
Cynicalabsurdance Show this Post

this story is a Farce ,

is Elohim , a Play on words

ok
to answer a question , why would the Hebrew God that was first a Nazi , turn on the Jews ?

Well , he didn't promise them a Rose Garden ,

so hell yes their Evil Baby Eating God will turn on them .
Reply Quote