The trilliums are in bloom.
UniqueStranger Show this Post

Posts:15,839 Threads:484 Joined:Jun 2012
And there are hundreds of them, but I could only take two pics and only of the white ones (we also have pink) because the black flies started attacking me and it started to rain - AGAIN! - and I didn't even pick one (even though it is legal to do so).

Quote:White trillium can symbolize the Christian Trinity, a doctrine stating that the Father, Jesus, and the Holy Spirit are one being. Picking white trillium off a mountain is said to bring rain, and the flower often symbolizes purity, beauty or recovery.


Quote:The white trillium (Trillium grandiflorum), also known as the wake-robin and the white lily, was officially adopted as Ontario's floral emblem in 1937. If you like symbolic correlations between floral inflorescence and the New Testament ... then check out the "Passion Flower".
Reply Quote
UniqueStranger Show this Post

(05-15-2019, 11:35 PM)Anonymous Kritter Wrote:  If you like symbolic correlations between floral inflorescence and the New Testament ... then check out the "Passion Flower".

Quote:PASSION FLOWER is a woody vine that has unusual blossoms. ... The flower's five petals and five petallike sepals represented the 10 apostles who remained faithful to Jesus throughout the Passion. The circle of hairlike rays above the petals suggested the crown of thorns that Jesus wore on the day of His death.

(05-15-2019, 11:35 PM)Anonymous Kritter Wrote:  If you like symbolic correlations between floral inflorescence and the New Testament ... then check out the "Passion Flower".

Quote:PASSION FLOWER is a woody vine that has unusual blossoms. ... The flower's five petals and five petallike sepals represented the 10 apostles who remained faithful to Jesus throughout the Passion. The circle of hairlike rays above the petals suggested the crown of thorns that Jesus wore on the day of His death.

Quote:each part of the flower holds symbolic meaning in recognition of the crucifixion story - the passion of the Christ. Five sepals and five petals refer to the ten faithful apostles (excluding Judas and Peter). Three stigma represent the three nails that held Christ to the cross, while five anthers represent his five sacred wounds. The tendrils of the flower are said to resemble the whips used in the flagellation, while the filaments, which can number in excess of a hundred depending on the flower, depict the crown of thorns.

Give me truths;
For I am weary of the surfaces,
And die of inanition. If I knew
Only the herbs and simples of the wood,
Rue, cinquefoil, gill, vervain, and agrimony,
Blue-vetch, and trillium, hawkweed, sassafras,
Milkweeds, and murky brakes, quaint pipes, and sundew,
And rare and virtuous roots, which in these woods
Draw untold juices from the common earth,
Untold, unknown, and I could surely spell
Their fragrance, and their chemistry apply
By sweet affinities to human flesh,
Driving the foe and stablishing the friend, —
O, that were much, and I could be a part
Of the round day, related to the sun
And planted world, and full executor
Of their imperfect functions.
But these young scholars, who invade our hills,
Bold as the engineer who fells the wood,
And travelling often in the cut he makes.
Love not the flower they pluck, and know it not,
And all their botany is Latin names.
The old men studied magic in the flowers,
And human fortunes in astronomy,
And an omnipotence in chemistry,
Preferring things to names, for these were men,
Were unitarians of the united world,
And, wheresoever their clear eye-beams fell,
They caught the footsteps of the SAME. Our eyes
Are armed, but we are strangers to the stars,
And strangers to the mystic beast and bird,
And strangers to the plant and to the mine.
The injured elements say, ‘Not in us;’
And night and day, ocean and continent,
Fire, plant, and mineral say, ‘Not in us,’
And haughtily return us stare for stare.
For we invade them impiously for gain;
We devastate them unreligiously,
And coldly ask their pottage, not their love.
Therefore they shove us from them, yield to us
Only what to our griping toil is due;
But the sweet affluence of love and song,
The rich results of the divine consents
Of man and earth, of world beloved and lover,
The nectar and ambrosia, are withheld;
And in the midst of spoils and slaves, we thieves
And pirates of the universe, shut out
Daily to a more thin and outward rind,
Turn pale and starve. Therefore, to our sick eyes,
The stunted trees look sick, the summer short,
Clouds shade the sun, which will not tan our hay,
And nothing thrives to reach its natural term;
And life, shorn of its venerable length,
Even at its greatest space is a defeat,
And dies in anger that it was a dupe;
And, in its highest noon and wantonness,
Is early frugal, like a beggar’s child;
With most unhandsome calculation taught,
Even in the hot pursuit of the best aims
And prizes of ambition, checks its hand,
Like Alpine cataracts frozen as they leaped,
Chilled with a miserly comparison
Of the toy’s purchase with the length of life."

Science rules over our innate knowledge that is within us, yet we continue to exploit nature.
Reply Quote
Octo Show this Post

Posts:41,604 Threads:1,591 Joined:Feb 2011
Lovely!! It's wonderful spring time here as well with both wood anemones and liverleaf out in full bloom! 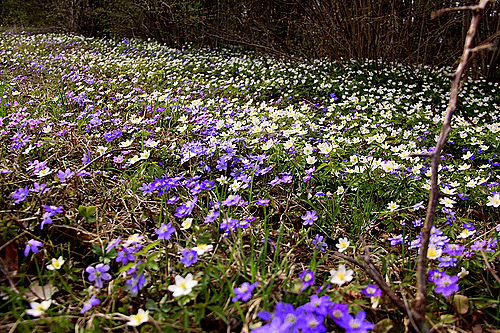 Quote:Hepatica is called liverleaf, liverwort and squirrel cups. The given name of liverleaf hepatica is apparent in the shape of leaves, which resemble a human liver. Native Americans in the Cherokee and Chippewa tribes used this plant to aid in liver disorders. This plant is still harvested for its medicinal values today.

Read more at Gardening Know How: Hepatica Wildflowers: Can You Grow Hepatica Flowers In The Garden https://www.gardeningknowhow.com/ornamen...lowers.htm

Posts:15,839 Threads:484 Joined:Jun 2012
This is another member of the lily family and it is named 'Bellwort'. It is growing along side the Trilliums. Strangely, I did not see pink trilliums yet, so maybe they come up later.

Bellwort symbolizes hopelessness - how negative. But with trillium symbolizing modest ambition - maybe there is modest hope to be had.

Pic of Bellwort in my forest. Here is the pond at the end of our property. Believe it or not this turns into a mud pit in the dead of Summer and I guess the abundant frogs bury themselves in the mud. Here is the passion flower.

I had some here in the past, none now though.

I have many dozens of different wildflowers. They have been blooming here for about 2 1/2 to 3 months now.

Here is an interesting note:

Quote:Other uses: the normally blue stamen hairs indicated mutation by turning pink when exposed to radiation. The same effect has since been observed when the spiderwort plant is subjected to chemical pollution.


So, the dayflower is better than a canary in a coalmine because it can indicate radiation or other chemicals. It's a good heads-up flower - like a carbon monoxide detector in the home.
Reply Quote
UniqueStranger Show this Post