'As marketing campaigns go, covering the New York subway with Nazi imagery must surely come under ‘Never Ever Go There’.

But that’s exactly what Amazon has done - and New Yorkers are not hugely impressed. ' 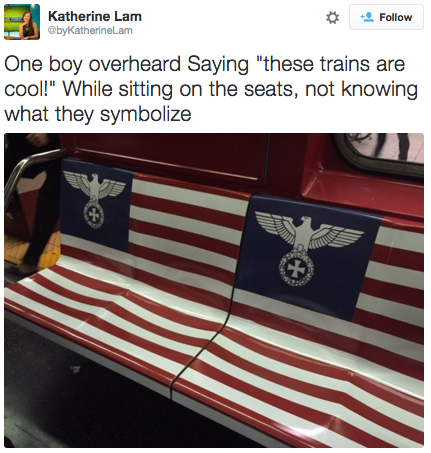 Subtle sorts of Soviet imagery rose to my attention over here in the 90's already...
then there were mass grave-looking SS Totenkopf skulls on everything
for a good while. Etc.

The Eagle is kind of ûberinyourface, I must say

well it is as close as they were gonna push it i guess.

Posts:30,320 Threads:1,495 Joined:Feb 2011
The internet giant is pushing its new drama, Man In The High Castle, which takes the question ‘What if the Nazis had won?’ and runs with it.

As the show imagines an alternate present where the US is under German and Japanese rule, plastering subway carriages with imperial imagery may have seemed like a good idea in a marketing meeting.

The ads fall short of daubing swastikas all over the place but do feature a reference to the Nazi iron cross (which takes the place of the stars in the American flag) and the rising sun imagery used by the Japanese empire during World War II.

In another online ad, the Statue of Liberty is seen giving a Nazi salute.

Sieg heil Amazon. That's highly offensive to a hell of a lot of people.

Anything for a buck I guess.

Posts:11,168 Threads:770 Joined:Feb 2011
Viral marketing for a new series. I've seen a few ads on tv.
What politics from both sides wants to teach us is that things are never complex. If you have your little package and something doesn't fit into that package, You don't know what to make of it so you want to dismiss it or then you will have to do the work of reconsidering your assumptions. - Michael Malice
Reply Quote
Octo Show this Post