Posts:10,078 Threads:719 Joined:Oct 2012
Steve McQueen was born march 24th 1930 and died november 7th 1980 at the age of 50 and he was one of the most popular and highest paid actors ever and he could have been even more popular and higher paid,but for whatever reasons,he turned down movie after movie again and again...

He turned down so many leading roles,more than any other actor and many of those films were very popular and are now considered classics...

One thing that Steve Mcqueen was very lucky to have turned down was an invitation by his friend Jay Sebring to come over Sharon Tates house for dinner on the very same night in august 1969 when everyone in that house was murdered by the Manson family gang...

Heres a list of the movies Steve Mcqueen was offered leading roles in but turned down,followed by the actor who was eventually chosen... 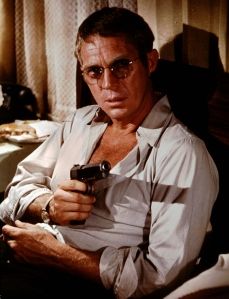 Return of the Seven - Robert Fuller

Play Misty for Me - Clint Eastwood

One Flew Over the Cuckoo's Nest - Jack Nicholson

A Bridge Too Far - Robert Redford

I think there was a pre Whitney Houston version. LOL

My favorite role of his

Many were called to play Willard in Apocalypse Now but Sheen was fated, destined for the role.
Reply Quote
Octo Show this Post

That movie was going to be filmed earlier than it was...

Its difficult imagining Steve McQueen In Apocalypse Now,because all we can do is visualize Martin Sheen in the lead role,but Steve Mcqueen was definitely first choice and i'm sure he would have been just as well,especially judging based on his fine performance in Papillon...

Just curious to ask why the "monday bombshell" pinned thread wont accept any of my posts? and i'm seeing an on screen pop up telling me I must use 85 or less characters,is that something new?
Reply Quote
Ruby Wolf Show this Post