😱 A KREMLIN mouthpiece has said that "knowing our leader," the Russian war in Ukraine will spark World War Three but added that Russians will be rewarded with a place in "heaven". ☠

Margarita Simonyan, the editor-in-chief of state broadcaster RT, has told Russian TV that there are two possible outcomes of the war in Ukraine. The Kremlin mouthpiece said that either Russia will lose in Ukraine or Moscow will start World War Three. Ms Simonyan is known to have a close relationship with President Vladimir Putin, even referencing this in her appearance on Tuesday.

She said that "knowing our leader," the likelihood of nuclear war is the "most probable outcome".

Russia's chief propagandist said that President Putin Putin will launch an all-out nuclear war on the West before he accepts defeat in Ukraine.

In an eerie remark, she added that the Russian war efforts and sacrifice will be rewarded with a place in heaven.

Is this a propaganda bluff or do you think she is serious? Is Putin really off his rocker to this degree?

If nukes are their leaders answer, then they have the wrong leader.

This Margarita Simonyan saying Russians will have a place in heaven if their leader decides to end the world should be a red flag...

With a yellow hammer and sickle. 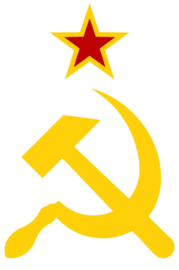 If Putin uses nukes he's sending his own people to death. They're bluffing.